Sanctions-breaching is on the rise, but satellite technology and analytics can protect insurers from undue risk, says Skytek.

Vessels are “going dark” in global hotspots, turning off transponders in an attempt to evade sanctions and embargoes.

“There is a lot going on at sea, and if people don’t want it to be seen, they will work hard to try and hide it” said Capt. Zevri. 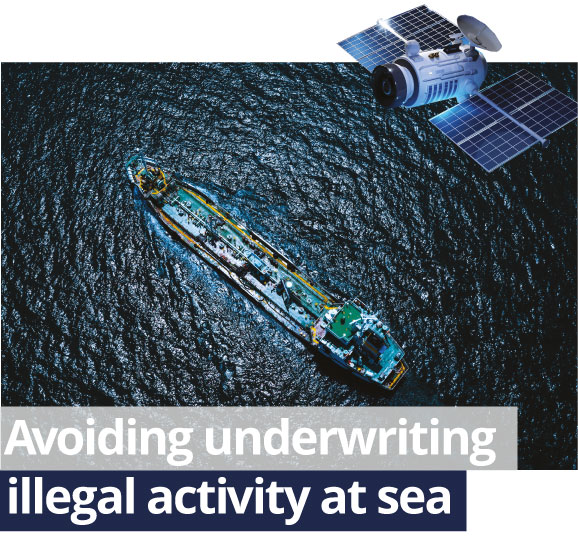 One recent report by the Associated Press newswire, published on July 13 this near noted that while sanctions had seen port calls in Venezuela plummet by 46 per cent, the Gulf of Venezuela and Venezeulan Carribean sea were not short of marine traffic. Indeed, 214 vessels that visited Venezuela in the year after sanctions were imposed had not been there in the previous 12 months, accounting for a full 33 per cent of Venezualan marine traffic. Of them, 103 were tankers, owned by 41 companies. The US has already sanctioned 50 vessels for illegal oil trading with the country.

The US is now probing Mexican and European companies allegedly involved in illicit trading, reported Reuters.

Venezuela is far from the only black spot: Iran has been selling oil via ship-to-ship transfers, and the captain of one ship, the Dominica-registered MT Gulf Sky, claims to have been hijacked near the Strait of Hormuz after disappearing, transponder off, from its UAE anchorage. The Gulf Sky had been at the centre of US allegations of sanctions evasion.

There are also growing concerns around maritime traffic to and from North Korea and Syria.

Clearly, the risks to the insurance industry are enormous. In May 2020 the US government published an advisory specifying the risk to insurance companies, singling out practices such as “going dark” by shutting off AIS transponders or “spoofing” the signal by pretending to be another vessel, alongside noting voyage irregularities, ship-to-ship transfers, byzantine changes in ownership and other methods of evading sanctions.

The US is now suggesting the industry needs to work smarter—and work together: AIS should be monitored more closely and ships should be followed throughout their entire ownership lifespan, while P&I Clubs should notify others of suspicious activity.

British security think-tank the Royal United Services Institute (RUSI), meanwhile, warned in its 2018 paper “Underwriting Proliferation: Sanctions Evasion, Proliferation on Finance and the Insurance Industry” that the complicated nature of information exchange in the sector, which is often reliant on clients’ information being passed down from other parties, resulted in less than ideal compliance. It went on to argue that insurers and reinsurers should take a more active approach to apply supply chain due diligence.

But how can the industry do that, when information is scarce, scattered, often out of date, and in the worst case scenario, actively being tampered with?

Skytek and global professional services provider Aon think the answer is visibility: both literally and in terms of historical behaviour.

Skytek’s React software suite provides virtually live satellite data on vessels’ locations, including noting—and alerting for—periods of dark activity. When combined with comprehensive data on ships’ histories, both in terms of voyages and ownership, as well as maintenance records and port data, Skytek React allows underwriters to take a close look at any vessel or company before taking on risk.

The stakes are high and illicit activity, while often off the grid, is no longer flying under the political radar. For example, in 2019 the UN heard that “insurance companies continue to unwittingly facilitate payments and provide coverage for vessels involved in ever-larger, multimillion-dollar, illegal ship-to-ship transfers of petroleum products, as well as an increasing number of ship-to-ship coal transfers and attempted trans-shipments”.

Skytek’s Capt. Zevri, said: ‘Today, the high seas are more risky than ever. Insurers and reinsurers need to protect themselves not only from extreme weather and poorly-maintained vessels, but active illegal activity.”

Indeed, as the winds of geopolitics shift—consider how rapidly the Iran deal broke down, or the on-again, off-again US rapprochement with North Korea—insurers and reinsurers find themselves playing cat and mouse, but blindfolded.

Technology can provide the necessary vision—and allow the sector to put clear blue water between itself and risky operators.

“By aggregating historical data with current activity Skytek React allows insurers and reinsurers to see the true picture of what is happening both at sea and on land,” said Zevri.

Predictive analytics in particular can be used to understand which vessels and owners are riskiest, while alerts for dark activity immediately flag suspect activity that could break the terms of cover as well as risky behaviour such as loitering in storm zones.

According to Zevri, as both the geopolitical and technological landscapes shift—last year the US asked insurers to take an active role in stamping out high risk activity—the best possible strategy is to shine a light on who is doing what, where and when.

“Really, operating in the dark can now be a thing of the past,” he said.